Open Tour has 3 routes, with a total of 34 stops across all 3 routes. Learn more and see the bus stops list.

Big Bus has two routes, with stops to see the major Paris attractions at Red Route, and Blue Route going to Montmartre, with stops including Moulin Rouge and Sacré-Cœur.

Pricing is similar. The quality of recording is also similar. The buses run with approximately the same frequency. 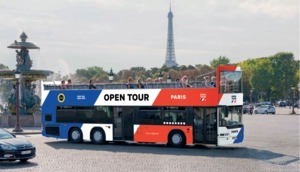 Top
Due to COVID-19 all tourism activities are currently suspended until further notice.